Do roots grow in drains? 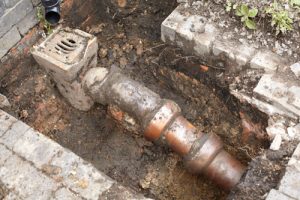 Sometimes, the cause of a blockage can come from seemingly nowhere. It is common for us to forget about what causes a blocked drain, and so often the problem is ignored until it develops into something that can cause a large amount of damage and is more expensive to rectify.

Roots require water and oxygen to grow, and because drainage systems are such a prolific source of everything that roots need they are a number one target for root invasion. If there is already signs of decay and areas of leaking within the system, the roots will find their way to this point of entry and continue to grow within the system.

This eventually prevents water and waste from flowing smoothly, and can lead to some severe blockages, and even worse leaks. This can pose a serious health risk to you and all who live at the property, so it is important to maintain your drains regularly to ensure that you are not faced with a much bigger problem later on.

One of the most common causes of outdoor drainage systems becoming damaged is root invasion. The idea of roots growing within your drain pipes can sound strange, but it is more common than you would think. Roots don’t just grow downwards either, they can grow up from underneath your house’s foundations, particularly in houses with slab foundations. But don’t worry – with a CCTV survey, we’ll be able to tell wherever the problem is.

With a slab foundation, it is possible for roots to grow upwards and then along the underside of a slab, through where the toilet drain penetrates this slab. From there, they can make their way down the toilet pipe.

One of the main indicators of this sort of problem is a toilet that blocks often. The blockage may seem small and can usually be eliminated by using a plunger but it doesn’t take long for the issue to return. Of course, this symptom is not a definite sign, and there could be many reasons behind the blockage, but it is definitely an indication that there is a problem you need to look at and it is easy to forget that root invasion could be the reason behind it. If you suspect root invasion is causing your drains some problems, call Blocked Drains Swindon.